NOTE: We are working on additions to the staff/program.  Check back soon.

Camp Louise is located in Cascade, MD, near Thurmont and little more than an hour north from the DC Beltway. It’s very close to the Pennsylvania border. 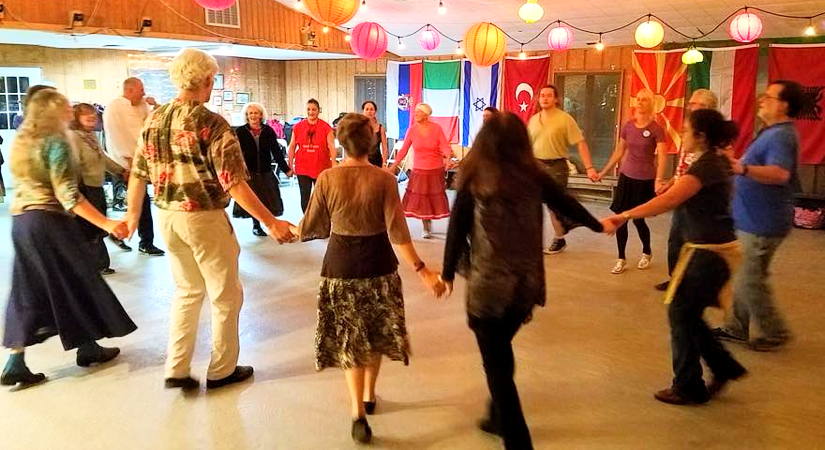 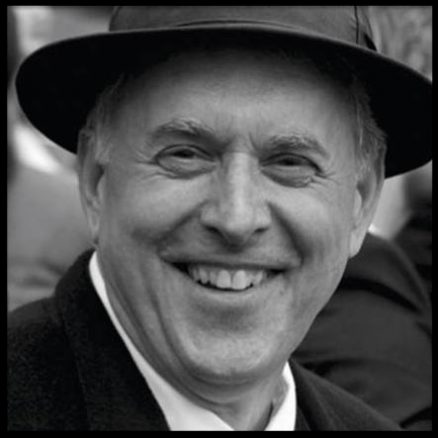 Steve began dancing as a teenager in the San Francisco Bay Area where he taught and performed with the Westwind International Folk Ensemble and the Perfiloff Russian Dance Ensemble. In 1970 he made his first research trip to Hungary and the former Yugoslavia, returning to study dance and Slavic languages at UCLA. Steve danced with AMAN Folk Ensemble and Vincent Evanchuk’s Ukrainian Dance Group while teaching at many of the folk dance coffee houses in Los Angeles. In 1972 he made a research trip to Hungary and the former Yugoslavia to learn and document village dances with Robert H. Leibman (including dances and music from the Albanian village of Krani on Lake Prespa in Macedonia). During this trip he met many dance specialists who would become instrumental in the direction of his life including Pece Atanasovski, Desa Djordević, Dr. Ivan Ivančan, and Dobrijvoje Putnik. Steve would spend the next 8 years living in Munich, Germany where he continued to teach and research ethnic dance. He co-founded, directed, and choreographed for the Gajda Folkore Ensemble, inviting top dancers and teachers from Central and South-Eastern Europe to Germany and led tours to Hungary and the Balkans. In 1980, he returned to the U.S.A. settling in New York. He continued to teach at dance camps throughout North America and Mexico, choreograph for many dance ensembles, and with his wife Susan, co-founded the Guzsaly Hungarian Dance Ensemble. Steve continues to teach and research dances from the Balkans, and he and Susan have made several trips to Albania.

Cristian was born in Bucharest, Romania. He started dancing in 1982 with different Romanian folk ensembles and studied with various specialists, including Theodor Vasilescu. Cristian was principal dancer with the National Ensemble Cununa Carpatilor. In 1990-91, he received his certificate as a recognized solo dancer and choreographer in the field of folklore from the Romanian Ministry of Culture and the ACAFR. In 1993, he joined Les Sortilèges, a professional folk dance company based in Montreal Canada, where he has danced, taught and choreographed. During his time in Canada, Cristian has acquired multiple skills in various dance forms, including modern dance, ballroom, jazz and tap, as well as French-Canadian and Irish step dancing.

Sonia was born in Quebec and has been a professional dancer for over 20 years. She was lead dancer, choreographer and artistic director, among other roles for Les Sortileges dance company, Canada’s oldest professional folk dance ensemble, with whom she developed several new productions. Sonia has toured worldwide and has been exposed to a wide range of dance techniques, including Romanian folk dance, Scottish Highland dancing, French-Canadian step dance and ballroom dance.

It was at Les Sortilèges that the two met and formed a professional and personal partnership. They have taught at l’École Supérieure de Danse du Québec, and have been part of the Artists in the Schools program sponsored by the Quebec Ministry of Education.

In recent years, Cristian and Sonia have developed a specific interest in working with recreational folk dance groups. They’ve been teaching in Brazil, Canada and the United States, Europe (Austria, Belgium, England, Germany, Italy, Norway, Switzerland and the Netherlands), Asia (Hong Kong, Japan, Singapore and Taiwan) to share their love of Romanian folk traditions. They have taught workshops in Canada and the United States and choreographed Romanian suites for performing groups, including the world-renowned BYU Folk Dance Ensemble in Utah.

They are well-loved for their enthusiasm, style, humor and high energy.  Some of their most popular dances include Made in Romania, Dana, Opinca, Opincuţa, Te Aven Baxtale, Încâlcita, Chef and Ina Ina.  They present their dances clearly, with intelligence and joy. Sonia and Cristian’s personality and heart are exceptional—it’s always fun to be with them!

Find out more at soniacristian.net.

Roo began folk dancing as a kid, and has been observing, learning, and studying Scandinavian dance since she saw the Hambo on the dance floor when she was in college, earning her Masters in Dance, with a focus in Dance Ethnology, from UCLA.   She began teaching Scandinavian dance after her first visit to the San Diego State University Folk Dance Conference where she met Ingvar Sodal.  Since 1983, Roo has traveled extensively in Scandinavia studying dance and participating in dance and music events including testing her skills and dancing in courses and competitions. She has been the American coordinator for several dance and music camps in Scandinavia and published a number of lengthy descriptions of Norwegian dances including Telespringar, Hallingspringar, and Valdresspringar. In addition, she wrote a guide to Scandinavian Dance Basics, and has published several articles.

Roo teaches many different kinds of Scandinavian dance but has focused especially on what she calls the turning dances of Norway and Sweden. Her teaching is infused with a great love of dancing and a desire to help others to love it too. Today she is recognized as one of the foremost exponents of Scandinavian dance in the United States.  Her hallmarks include her clear, positive teaching that incorporates background information, styling, and technique and her ability to present the basic concepts of dance to dancers of all levels in a fun and lighthearted manner.

Born in California, Loretta began classical violin and piano lessons as a child. In 1976, already active in ethnic folk music and dance, Loretta began her love affair with the hardingfele when she met Sigbjørn Bernhoft Osa, virtuoso hardingfele player and Norway’s “musical ambassador to the world.” Immediately smitten with the instrument and its music, she threw herself into learning the Norwegian language, and in 1979 she spent a year in Western Telemark, studying and performing with local fiddlers. Since then she has made nearly twenty trips to Norway to study with masters of this unique local instrument.

In a country that protects its traditions vigilantly, Loretta Kelley is regarded with tremendous respect for her talent, skill, and devotion to Norway’s national instrument. She has been invited to perform in numerous venues, and her playing was featured in an hour-long program on Norway’s national radio station. She has consistently placed well in fiddle contests, and has accompanied many top Norwegian dancers in their own competitions. She has contributed articles to Norwegian books on the instrument and on one of its foremost players, and has done considerable research on the hardingfele traditions of two valleys.

At home in America, Loretta continues to promote the hardingfele and its music through performance, teaching, publishing, and translating. An inspiring teacher and brilliant dance musician, she continues to be a crucial staff member at Scandinavian music and dance camps and workshops throughout the US. As president of the Hardanger Fiddle Association of America (www.hfaa.org), she assists in the revival of an intrument which was first brought to North America by the wave of Norwegian immigrants that began in the 1850s.

Loretta’s performances include appearances on Garrison Keillor’s Prairie Home Companion and American Radio Company, National Public Radio’s All Things Considered, The Kennedy Center’s Millennium Stage, and The Christmas Revels. She has released four recordings. The first two, Dansekveld and AmerikaSpel, are largely solo recordings. Loretta also collaborated with two other leading lights of Scandinavian music in America, Andrea Hoag and Charlie Pilzer, on a pair of highly acclaimed CDs of traditional and recently-composed Scandinavian tunes.Hambo in the Barn (1996) and Hambo in the Snow (2006) were released on the Azalea City Recordings label. Hambo in the Snow was nominated for a 2007 GRAMMY Award as Best Traditional World Music Album. 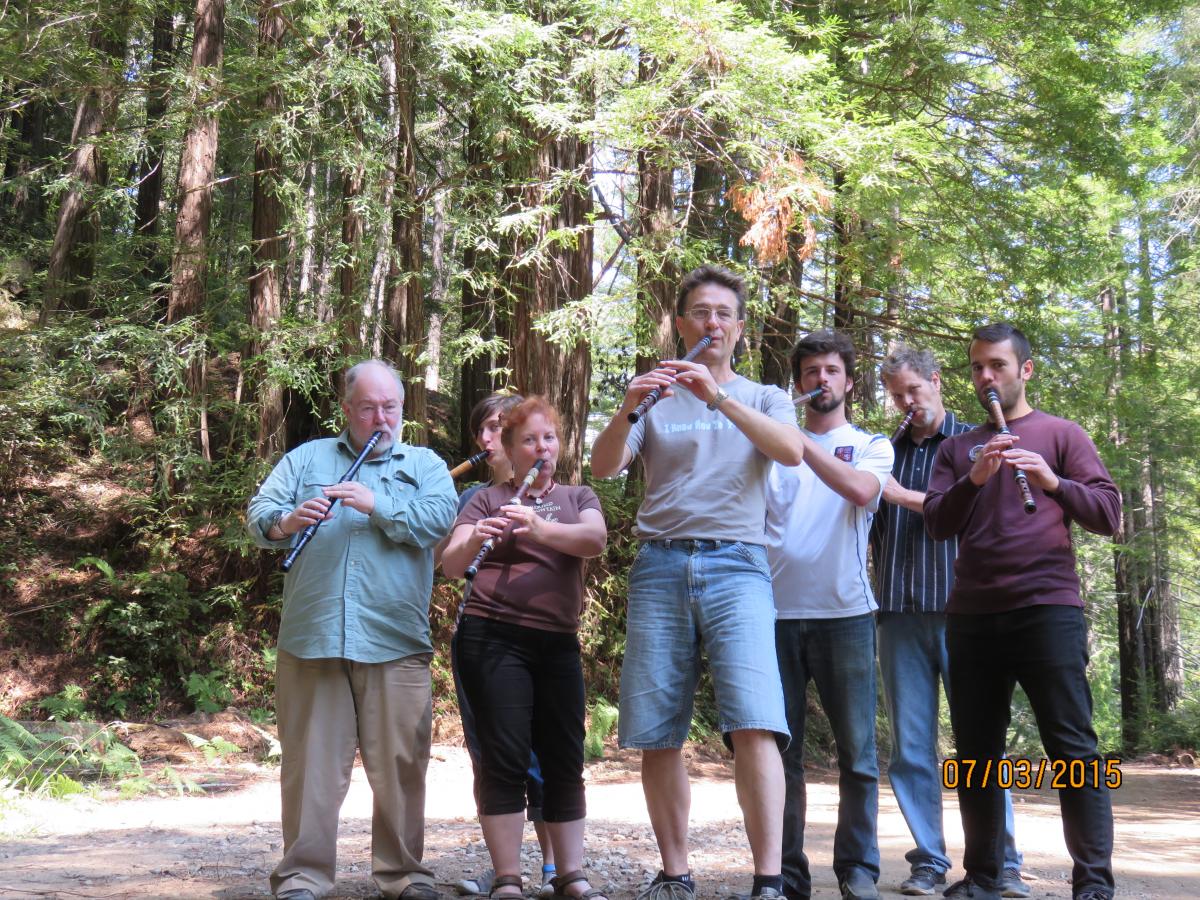 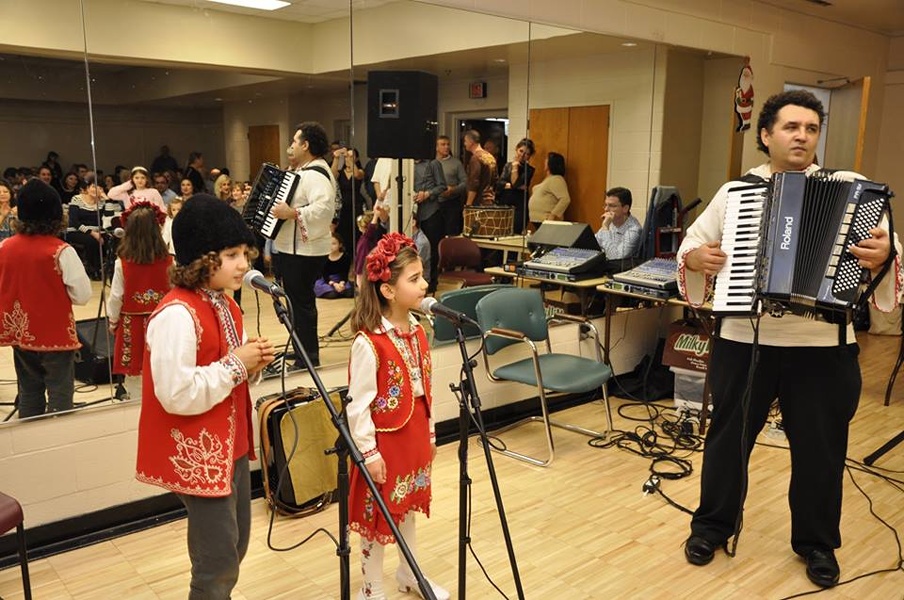 The Balkan Soul Band has been performing since 2018 for the Bulgarian Culture Center of Washington, DC and the Bulgarian School of Baltimore.  The band performs mostly traditional Bulgarian songs and dance tunes.  In the past year, the band began expanding its  repertoire with Romanian Serbian, Albanian, and Macedonian music.

Kalin Kirilov, born in Vidin, NW Bulgaria, began singing and playing the accordion at the age of 4.  He studied tambura and music theory in Vidin and Pleven and graduated from the Academy of usic and Dance in Plovdiv in 1998.  After coming to the US in 2001, Kalin received a MA in Folklore and a Ph.D. in Music Theory from the University of Oregon.  A master of multiple instruments, Kalin has performed extensively in Bulgaria and abroad, recorded with Bulgarian National Radio, and toured the US with the legendary Ivo Papasov and Yuri Yunakov. Kalin  is a professor of music at Towson University.   He teaches music theory, ear training, ethnomusicology and creative music technology.

Valeri Georgiev is from the Bulgarian Danube town of Ruse. He studied kaval in Kotel with Stoyan Chobanov and Georgi Penev, and graduated from the Plovdiv Academy of Arts with a BA degree in folk-ensemble conducting.  During his university years in Plovdiv Valeri performed with the student band Puldin and with several wedding groups: Luda Yana, Melodia, and Thracian Stars.

After completing his education he returned to Ruse and joined the band of the Folkdance Theatre “Naiden Kirov,” and later became its musical director. With the dance ensemble, Valeri was featured on many TV and radio programs and toured all over the world. He also performed and recorded with the Ruse-based “Orkestar Horo.” Valeri composed the music for the theater piece “Geracite” and arranged many folk songs and instrumental melodies.

Since 2000 Valeri has resided in the Washington, DC, area, where he plays and manages the Bulgarian folk band Lyuti Chushki and the duo HaSega!. Valeri was a recipient of the 2008 Maryland Traditional Arts Grant. In 2012 he received the “Sts. Cyril and Methodius” award for the preservation and promotion of Bulgarian culture abroad. He has performed as a guest musician with the Kolevi Family Orchestra, Solomon’s Dream, Balkania Orchestra from Toronto, Trio Traki from Madrid, and the Locrea Project.

CAMP IS CANCELED THIS YEAR.  DO NOT REGISTER

REGISTRATION: See link below.
Registration fee includes meals, snacks, cabin or tent space, use of camp facilities, and admission to all events.

Anyone wishing to attend- even for one day or evening- must register in advance and provide proof of vaccination.

WORK EXCHANGE SCHOLARSHIPS
A limited number of full and partial scholarships are available for participants willing to work during the weekend. To apply, contact us with a short letter telling us why you want or need a scholarship. Applications, along with a check for the scholarship fee ($250), are due by August 15.

World Music & Dance Institute is a non-profit, 501(c)(3) organization presenting and promoting traditional music & dance from around the world.

For more information, please contact us by completing the camp inquiry form, call or text 301-466-3018